District Camera is an Authorized USA Dealer for all brands we sell.

Available for pickup in 1 store:

Skip to the end of the images gallery 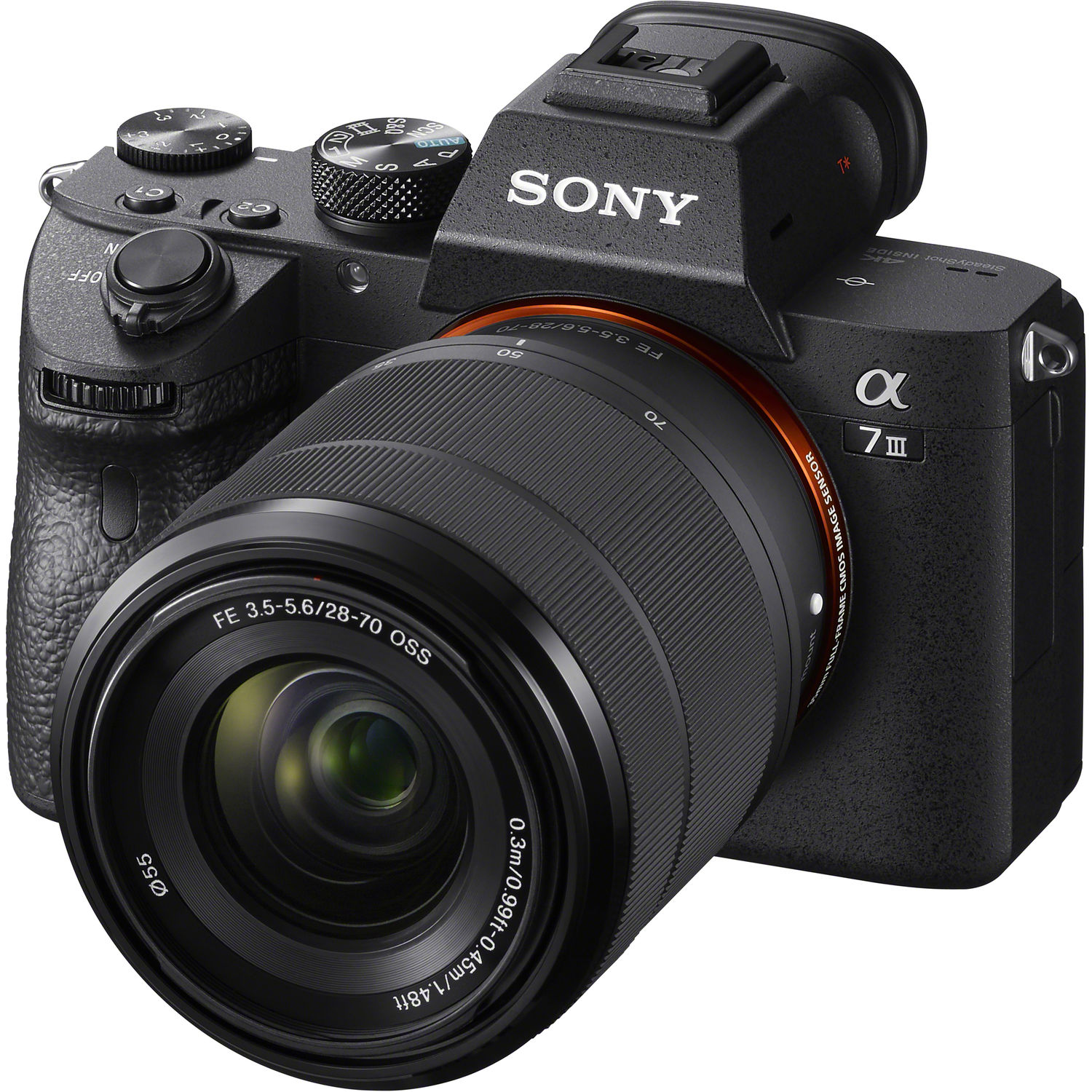 The newly developed 24.2MP back-illuminated Exmor R™ CMOS image sensor is paired with a front-end LSI that effectively doubles the readout speed of the image sensor, as well as an updated BIONZ X™ processing-engine that boosts processing speed by approximately 1.8 times compared to the ?7 II. This results in high sensitivity with low-noise performance and wide 15-stop4 dynamic range. No optical low pass filter maximizes resolution, while also having the ability to output 14 bit RAW4 format even when shooting in silent5 or continuous mode. Nothing less than spectacular images.

The a7 III features a new front-end LSI that effectively doubles* the readout speed of the image sensor, as well as an updated BIONZ X™ processing-engine that boosts processing speed by approximately 1.8 times compared to the a7 II. These powerful components work together to allow the camera to shoot at faster speeds while also enabling its impressive ISO range of 100 - 51200 (expandable to ISO 50 - 204800 for still images and massive 15-stop4 dynamic range at low sensitivity settings. This ensures outstanding overall performance at all settings and in all shooting conditions.

Up to 10fps1 with Silent5 or Mechanical Shutter

The a7 III is equipped with a refined image processing system that allows it to capture full 24.2MP images at up to 10 fps1 with continuous and accurate AF/AE (autofocus and auto exposure) tracking for up to 177 Standard JPEG images, 89 compressed RAW images or 40 uncompressed RAW images. This high speed 10 fps mode is available with either a mechanical shutter or an electronic shutter for completely silent5 shooting. The a7 III can also shoot continuously at up to 8 fps1 in live view mode with minimal lag in the viewfinder or LCD screen. These high speed options ensure that fast moving subjects can be captured with extreme accuracy and incredible image detail.

The a7 III features a world class autofocus system comprised of 693 focal-plane phase-detection AF points that cover approximately 93% of the image area, 425 contrast AF points and reliable Eye-AF. When combined, both contrast and phase detection AF points form the 4D FOCUS ™ hybrid AF system for wide, fast, reliable AF that locks on and stays locked on. This advanced system delivers AF acquisition in about half the time as the a7 II in low-light conditions with tracking that is approximately 2 times more accurate as well. The acclaimed Eye AF feature is also approximately twice as effective4, and is available when utilizing AF-C mode and with Sonys A-mount lenses9 with an adapter.

The 5-axis in-body SteadyShot™ image stabilization system has been fine-tuned to support high-resolution shooting capacity, resulting in an image stabilization system at 5-step6 shutter speed advantage. Camera shake is effectively compensated on 5 axes: pitch and yaw that have the largest overall impact on image quality; X and Y shift that is most apparent at high magnification, and roll that can ruin night shots and movies. Stabilization is applied to the live-view image, making it easier to frame fast-moving subjects. Effective stabilization is provided for movies as well as stills, and for A-mount lenses9 attached via a mount adapter.

Two SD media card slots are provided for still and movie storage (one slot for SD cards or Memory Stick) with the lower card slot being UHS-II compatible for fast write speed. Still or movie data can be simultaneously recorded to both cards for backup, or RAW4 images can be recorded to one card while JPEG images are recorded to the other. It is also possible to record stills and movies to different cards. Relay recording automatically switches to the second card when the first card is full. Data can be copied between cards while in the camera, for convenient back-up. Sony SF-G series UHS-II SD cards are ideal for situations where maximum transfer speed is required.

The a7 III is exceptionally capable as a video camera, offering 4K2 (3840x2160 pixels) video recording across the full width of the full-frame image sensor. In video mode, the a7 III uses full pixel readout without pixel binning to collect about 2.4x the amount of data required for 4K movies, and then oversamples it to produce high quality 4K footage with exceptional detail and depth. Both S-Log2 and S-Log3 are available for increased color grading flexibility, while HLG (Hybrid Log-Gamma)3 is included to support an Instant HDR (High Dynamic Range) workflow, allowing HDR (HLG) compatible TVs to playback beautiful, true-to-life 4K HDR imagery. The a7 III can also record Full HD at 120 fps2 at up to 100 Mbps, allowing footage to be reviewed and eventually edited into 4x or 5x slow motion11 video files in Full HD resolution.

The detail of 4K2, the beauty of HDR3

4K2 HDR3 (High Dynamic Range) astonishes viewers with visual depth and impact that are less like conventional movies and television - and more like real life. With the ability to reproduce images from deep shadows to piercing highlights, 4K High Dynamic Range (HDR) is astonishing. With Instant HDR, the a7 III empowers you to capture High Dynamic Range without complex post production. Hybrid Log-Gamma (HLG) recording captures HDR, yet plays back beautifully on both HDR and conventional televisions. For added versatility, the camera also provides S-Log3 encoding.

The high-capacity NP-FZ100 Rechargeable Battery has approximately 2.2x the capacity of the NP-FW50 W-series battery giving the a7 III the longest7 rated battery life of any Mirrorless camera at 710 shots8 per charge . The optional VG-C3EM vertical grip (sold separately) houses two batteries and when you need serious stamina for long sessions theres the NPA-MQZ1K Multi Battery Adaptor Kit (sold separately) that can hold up to four batteries. The NP-FZ100 also supports InfoLITHIUM® technology, which makes it possible to view the remaining battery power as both a percentage display and five step icon on the cameras LCD screen. Also check out the optional BC-QZ1 Battery Charger

Free shipping on all orders over $49.

One of the things we strive for is to provide you with the BEST possible price among any legitimate authorized dealer. On occasion, however, due to manufacturers restrictions or other restrictions, we may not be allowed to publish our lowest price on our website.

If you would like to receive our lowest possible price for the Sony A7 III Mirrorless Camera with 28-70mm Lens, please fill out the following information:

We ABSOLUTELY want your business, so if you find a better price elsewhere, let us know. We are here for you.
Respectable authorized retailers adhere to MAP policies, which means the advertised price is usually the same price found at any authorized dealer. Sometimes products aren't included in those MAP policies, resulting in different prices on some websites.
We will match the price for products from these major web retailers: Adorama.com, BHphotovideo.com, BestBuy.com, OfficeDepot.com, OfficeMax.com, Sears.com, Staples.com, Target.com, Walmart.com and Amazon.com (excluding Amazon's 3rd party marketplace sellers).
© 2010-2020 District Camera and Imaging. All Rights Reserved.